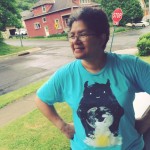 Dawn spent twelve years as the owner/operator of a single-person publishing company prior to returning to school for a BA. The subject of her flagship periodical publication, The MicroEnterprise Journal, was U.S. microbusinesses (firms with fewer than 5 employees), most of which are single-person or nonemployer businesses. She conducted hundreds of interviews of single-person business owners from all around the country for the publication, which gave her an strong sense of the motivations, community membership, and social challenges of the self-employed.

She then returned to school in 2010, enrolling in Hartwick College in Oneonta, NY to pursue a BA in anthropology and economics. She completed a senior thesis on the topic of economic development by researching a historical case study of nearby Delaware County, NY from the colonial period to the present.

After earning her BA, Dawn worked for two years as workforce development specialist for the County of Otsego Industrial Development Agency. During that time, she became familiar with the challenges facing workforce development professionals in the face of flexible, casualized labor and its impacts on desperate, low-income, working class citizens.

Dawn entered the Ph.D. program at the University of North Carolina at Chapel Hill in 2016. She conducted preliminary research among self-employed individuals in and around Durham, NC; that research informed her master’s thesis, entitled Iteration of or Escape from Neoliberalism: Self-Employment in the Southeastern U.S.

Her current research interest examines self-employment in mature capitalist economies like the United States to assess its similarities and differences from both traditional entrepreneurship and traditional employment. She is also interested in documenting how self-employment changes the practices, particulars, and temporal rhythms of daily life.